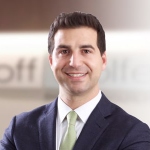 , co-managing partner of Skoloff & Wolfe, P.C., completed his term in August as Chair of the American Bar Association (ABA) Section of Family Law. Prior to his term as chair, Mr. Wolfe held numerous leadership positions in the ABA, including as a member of the ABA’s Executive Committee, Board of Governors and House of Delegates.

Under Mr. Wolfe’s guidance the Family Law section undertook several new initiatives to help promote the fair practice of family law for individuals and families of all means. These included a charitable fund to help promote access to justice, as well as to support the organization’s public service projects and educational programs. He also oversaw the section’s Covid-19 response by streamlining the organization’s online capabilities to help move ABA events to a virtual platform.

“I’m extremely proud that during my term the fund helped provide a way to recognize the outstanding family lawyers who work pro bono to help people who might otherwise be unable to afford professional legal representation,” Mr. Wolfe said. “Donations to the charitable fund are helping the Family Law section enhance diversity and inclusion in the profession. I am proud of the important work being done by our Section.”

A Constant Presence in Industry Organizations

As chair of Skoloff & Wolfe, P.C. matrimonial and litigation departments, Mr. Wolfe has held numerous other leadership positions in industry organizations including serving on the board of trustees of the New Jersey State Bar Association, the executive committee of its Family Law Section, and chair of its Young Lawyers Division.

Prior to his career at Skoloff & Wolfe, Mr. Wolfe practiced as a member of the Milbank, Tweed, Hadley & McCloy litigation department in New York City. He has successfully represented plaintiffs and defendants at the trial and appellate levels in the state and federal courts in New York, New Jersey and Pennsylvania, and the United States Supreme Court. He also frequently serves as local counsel for out of state law firms.