United States Court of Appeals for the Second Circuits

United States Court of Appeals for the Third Circuits 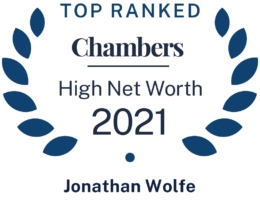 Jonathan is Co-Managing Partner of Skoloff & Wolfe and Chair of the firm’s Matrimonial and Litigation Departments. He focuses his practice on business litigation and matrimonial disputes.

Jonathan began his career in the litigation department of Milbank, Tweed, Hadley & McCloy in New York. He uses his background in financial disputes to represent leaders or the spouses of leaders from the finance, real estate, professional and entertainment/sports communities in complex matrimonial matters. A significant portion of his practice is devoted to business valuation, private equity/hedge funds, treatment of trust assets in divorce and the protection of non-marital assets. He also assists clients in all other aspects of matrimonial and family law, including custody and parenting time, and the preparation of marital, prenuptial and mid-marriage agreements.

Jonathan’s commercial litigation experience includes representing publicly and privately held corporations, partnerships and individuals in complex, high-stakes business disputes. In a victory that received national attention, he successfully defended a hedge fund against multi-billion dollar civil racketeering and conspiracy claims. He has experience pursuing and defending a wide range of business and investment disputes, including claims for breach of contract, fraud, negligent misrepresentation, breach of fiduciary duty, tortious interference, unfair competition, breach of restrictive covenants, and misappropriation of trade secrets. He has successfully represented clients at the trial and appellate levels in the state and federal courts in New York, New Jersey and the United States Supreme Court. He frequently serves as local counsel for out of state law firms.

Jonathan has been listed as one of the “Leading Lawyers In America” byBest Lawyers, one of the nation’s “500 Leading Lawyers” by Lawdragon, and a “Super Lawyer” by Super Lawyers for nine consecutive years. Best Lawyers named Mr. Wolfe its 2019 “Lawyer of the Year” for Family Law in New Jersey (Newark area). In recognizing Mr. Wolfe, Lawdragon stated “proving his diverse litigation talents, Wolfe represented Katie Holmes in her New York divorce from Tom Cruise and successfully defended a hedge fund against an $8 billion RICO claim.” The New Jersey Law Journal also noted “Wolfe has excelled at both ‘bet your company litigation’ and high-profile matrimonial disputes.” The International Business Times called Jonathan “one of the leading matrimonial lawyers in the United States.”

The 2021 edition of Chambers High Net Worth has ranked Jonathan in Band 1 for High Net Worth Family/Matrimonial in the state of New Jersey. Wolfe is one of only three lawyers to receive this recognition, which Chambers explains “identifies the leading professional advisors to the Private Wealth market in New Jersey.”

Jonathan lectures across the country to lawyers, judges, accountants, financial advisors, and business valuation professionals. He is regularly called upon to present to local and national bar associations, accounting associations, and financial institutions on topics ranging from keys to successful litigation techniques, handling high profile matters, business valuation, discovery of hidden assets and income, and the treatment of trust assets in divorce. His presentations include:

Welcome Stranger: Why You Need Commercial Property Tax Due Diligence Before Acquisition